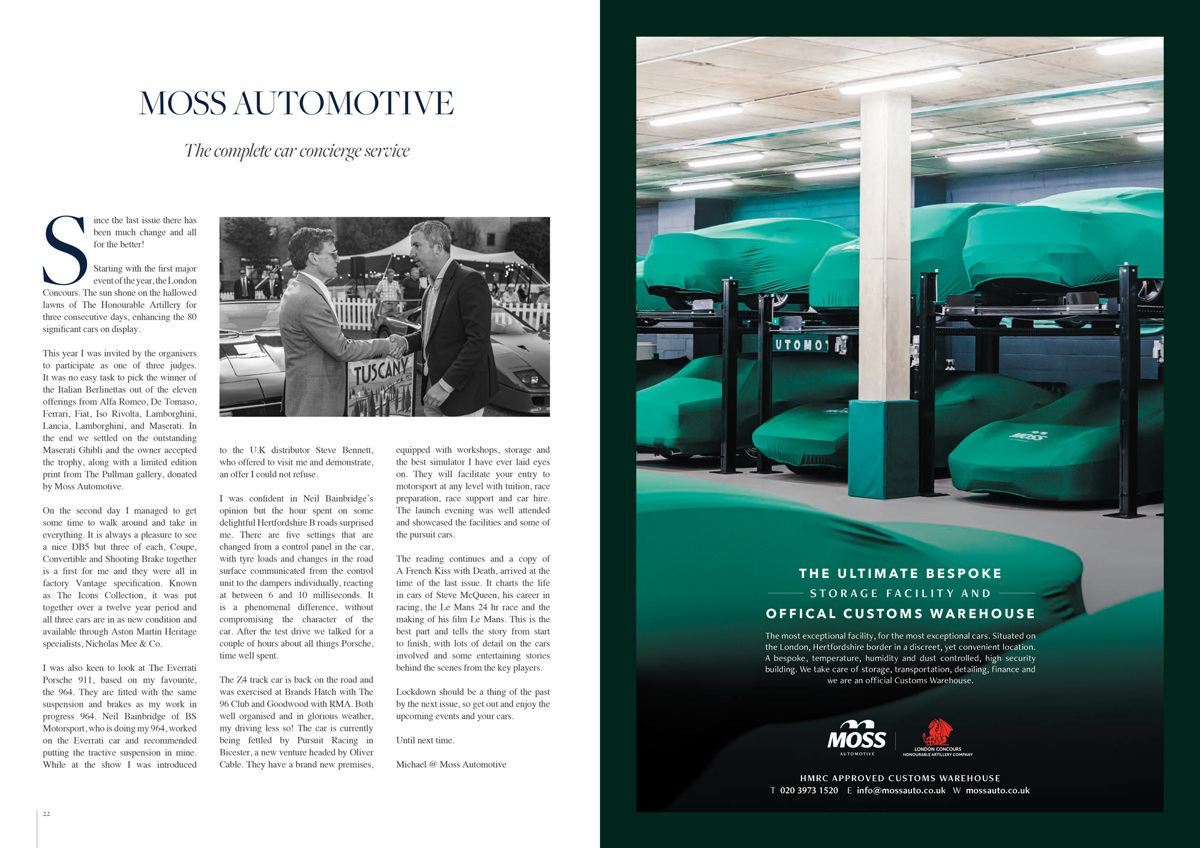 Since the last issue there has been much change and all for the better!

Starting with the first major event of the year, the London Concours. The sun shone on the hallowed lawns of The Honourable Artillery for three consecutive days, enhancing the 80significant cars on display.

This year I was invited by the organisers to participate as one of three judges. It was no easy task to pick the winner of the Italian Berlinettas out of the eleven offerings from Alfa Romeo, De Tomaso, Ferrari, Fiat, Iso Rivolta, Lamborghini, Lancia, Lamborghini, and Maserati. In the end we settled on the outstanding Maserati Ghibli and the owner accepted the trophy, along with a limited edition print from The Pullman gallery, donated by Moss Automotive.

On the second day I managed to get some time to walk around and take in everything. It is always a pleasure to see a nice DB5 but three of each, Coupe, Convertible and Shooting Brake together is a first for me and they were all in factory Vantage specification. Known as The Icons Collection, it was put together over a twelve year period and all three cars are in as new condition and available through Aston Martin Heritage specialists, Nicholas Mee & Co.

I was also keen to look at The Everrati Porsche 911, based on my favourite, the 964. They are fitted with the same suspension and brakes as my work in progress 964. Neil Bainbridge of BS Motorsport, who is doing my 964, worked on the Everrati car and recommended putting the tractive suspension in mine. While at the show I was introduced to the U.K distributor Steve Bennett, who offered to visit me and demonstrate, an offer I could not refuse.

I was confident in Neil Bainbridge’s opinion but the hour spent on some delightful Hertfordshire B roads surprised me. There are five settings that are changed from a control panel in the car, with tyre loads and changes in the road surface communicated from the control unit to the dampers individually, reacting at between 6 and 10 milliseconds. It is a phenomenal difference, without compromising the character of the car. After the test drive we talked for a couple of hours about all things Porsche, time well spent.

The Z4 track car is back on the road and was exercised at Brands Hatch with The96 Club and Goodwood with RMA. Both well organised and in glorious weather, my driving less so! The car is currently being fettled by Pursuit Racing in Bicester, a new venture headed by Oliver Cable. They have a brand new premises, equipped with workshops, storage and the best simulator I have ever laid eyes on. They will facilitate your entry to motorsport at any level with tuition, race preparation, race support and car hire. The launch evening was well attended and showcased the facilities and some of the pursuit cars.

The reading continues and a copy of A French Kiss with Death, arrived at the time of the last issue. It charts the life in cars of Steve McQueen, his career in racing, the Le Mans 24 hr race and the making of his film Le Mans. This is the best part and tells the story from start to finish, with lots of detail on the cars involved and some entertaining stories behind the scenes from the key players.

Lockdown should be a thing of the past by the next issue, so get out and enjoy the upcoming events and your cars.